Gliwice is a city in Upper Silesia, in southern Poland. The city is located in the Silesian Highlands, on the Kłodnica river. It lies approximately 25 km west from Katowice, regional capital of the Silesian Voivodeship.

Gliwice is the westernmost city of the Upper Silesian metropolis, a conurbation of 1.9 million people, and is the third-largest city of this area, with 179,806 permanent residents as of 2018.

Gliwicki Klub Sportowy Piast Gliwice is a Polish football club based in Gliwice, Poland. In the 2018–19 season, Piast won its first Polish championship.

Polish złoty (PLN) is the currency of Poland. 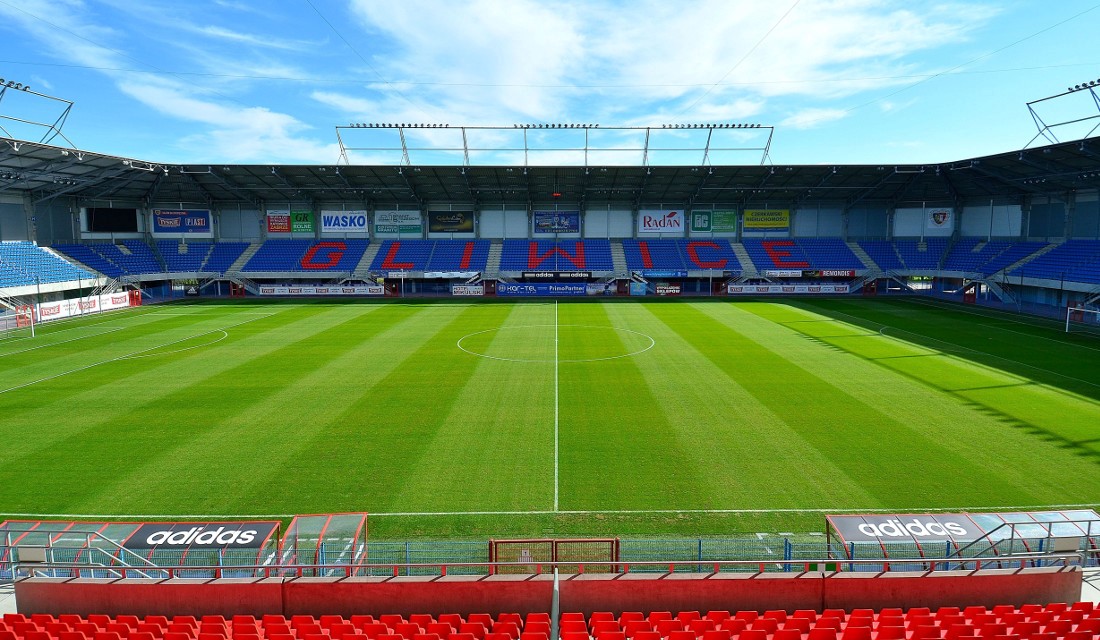 Stadion Miejski w Gliwicach (English: Municipal Stadium in Gliwice) is a football-specific stadium located in Gliwice, Poland. It is the home ground of Piast Gliwice. The stadium capacity is 9,913 seats. The stadium underwent a complete reconstruction which took place from September 2010 to July 2011 including the building of four new fully covered and all-seated stands. 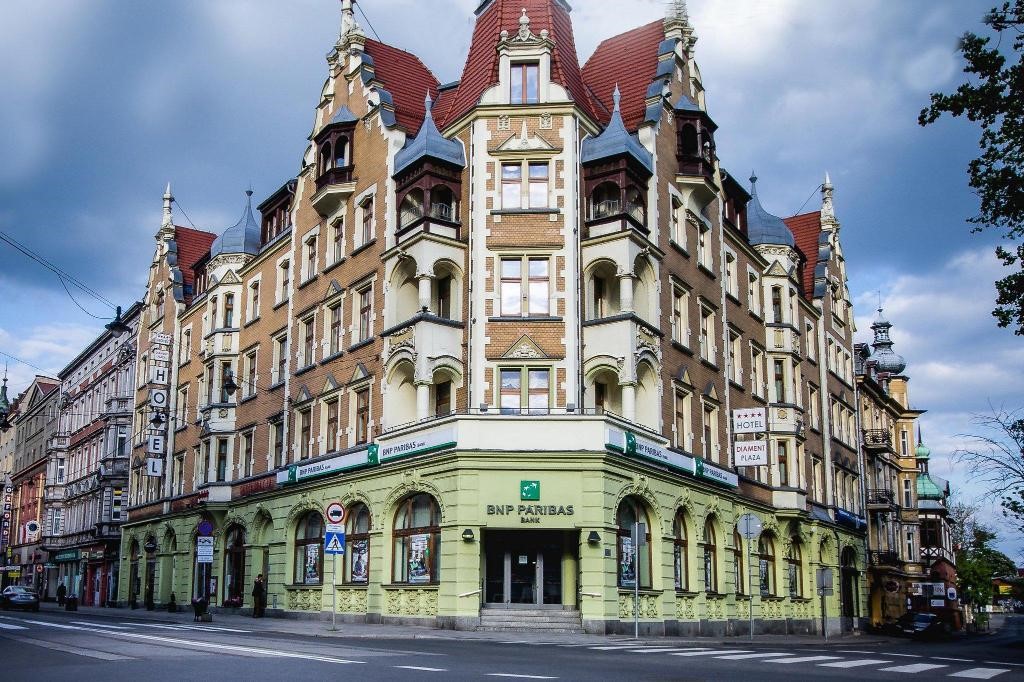 The 4-star Hotel Diament Plaza Gliwice is located in the centre of Gliwice, in a beautiful tenement house from the 19th century. The Municipal Office, the Silesian Technical University, the train station and the market square are within walking distance. The interiors of the hotel combine original architectonic elements with modern interiors. Each room comes with free WiFi, a desk, a minibar, tea and coffee making facilities, as well as a Smart TV with satellite channels. A private bathroom with a bath or shower, a hairdryer and free toiletries is featured.Varied buffet breakfast is offered daily in the elegant Poziom Restaurant which specializes in international cuisine and there is also the Lobby Bar & Live Cooking which serves a wide range of drinks and snacks

There is a secure car park only 120 metres away from the hotel. Hotel Diament Plaza Gliwice offers currency exchange point. 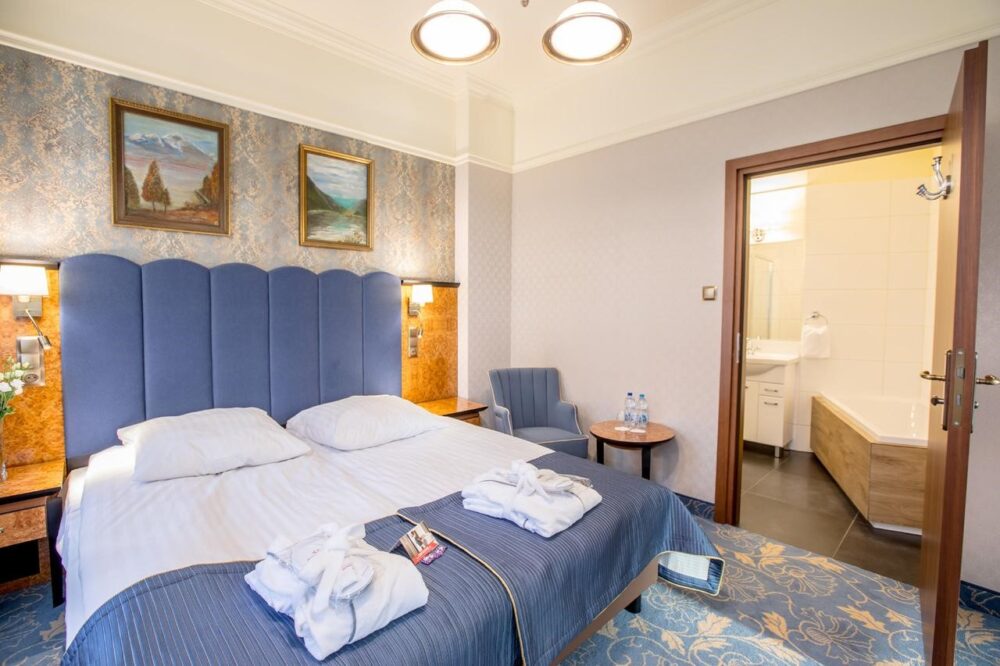 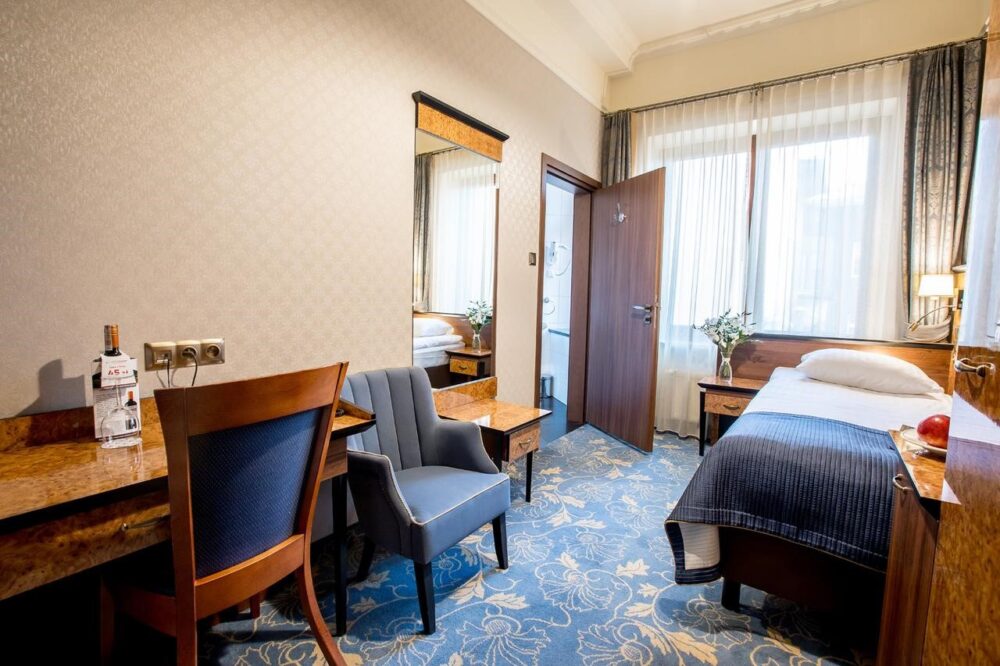 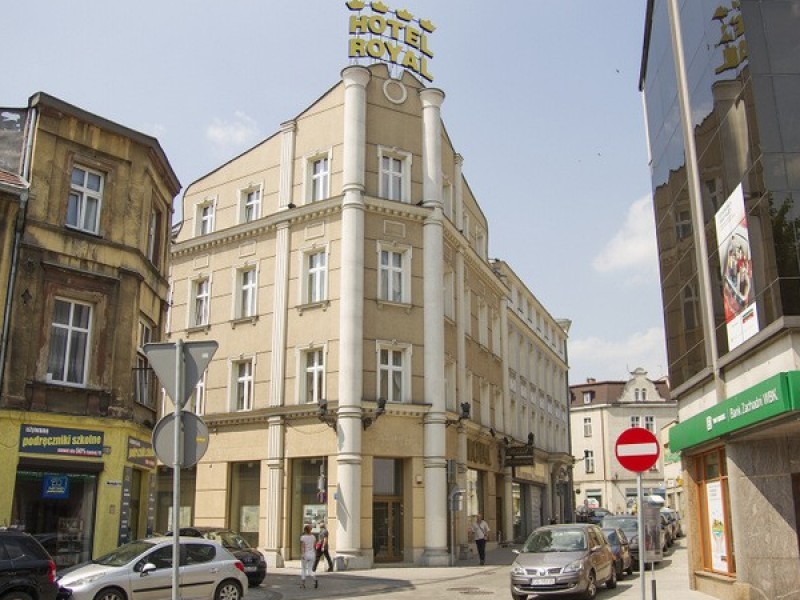 Hotel Royal is located in the Gliwice Old Town. It features air-conditioned rooms with free Wi-Fi and satellite TV. Free access to a sauna and a fitness club is provided.

All rooms at the Royal are fitted with a private bathroom with a bath and a hairdryer. Each comes with a minibar and a safety deposit box. Some have a seating area.

A buffet breakfast is served every morning in a hotel restaurant which specialises in Polish and European dishes. Guests can relax in a hotel bar and try a selection of snacks and drinks.

Front desk staff is available 24 hours a day and can assist with laundry and ironing services. Free guarded parking is provided on site. Massage services and a solarium are available. 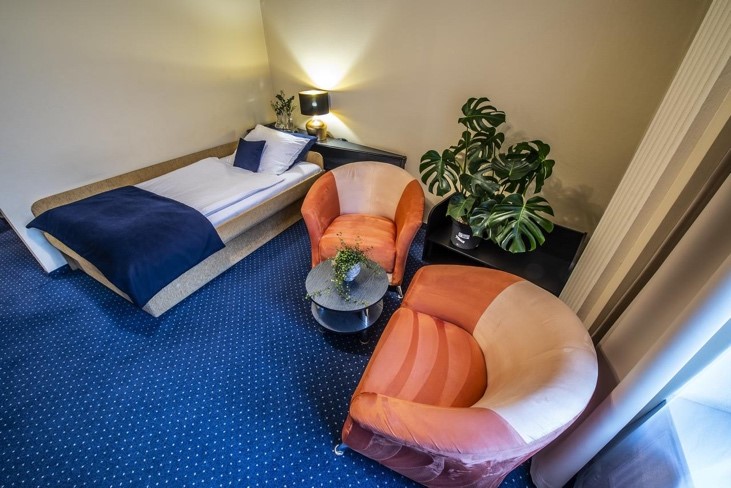 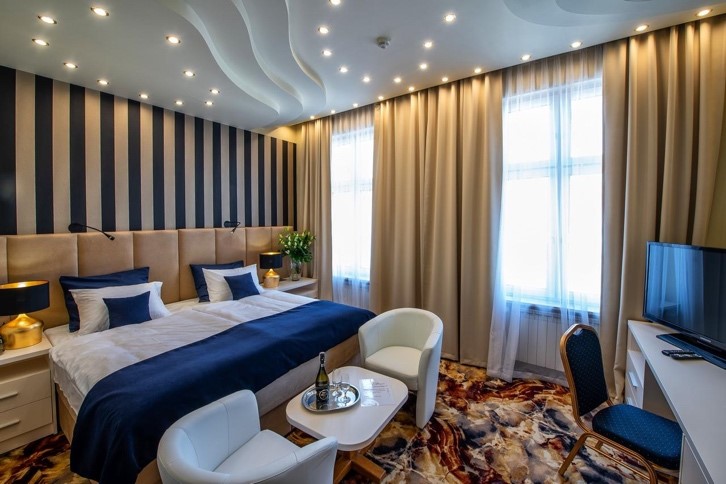 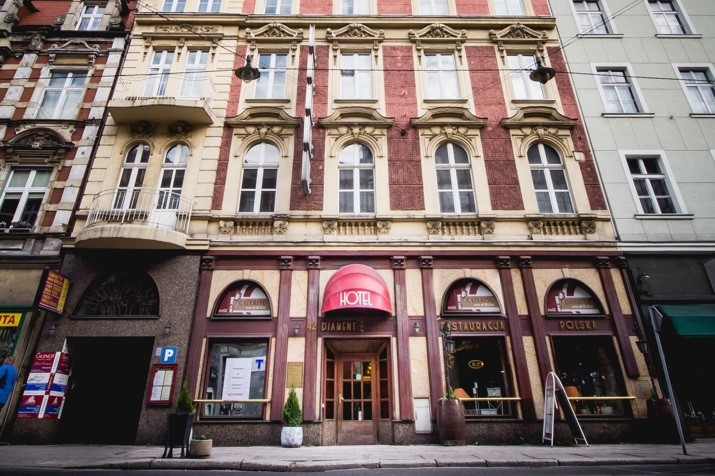 This comfortable hotel offers a prime location in the center of Gliwice, close to the Market Square, the Municipal Office, the Silesian University of Technology, the theater and the main railway station.

Each of the comfortable rooms at Hotel Diament Economy is well-appointed with free WiFi, a work desk, tea/coffee making facilities and satellite TV. Each room features a a bathroom with a shower and free toiletries.

Guests can enjoy some pampering at Hotel Diament Economy’s hairdresser and beauty salon. A safe, luggage storage and laundry service are available. Ironing facilities will be delivered upon request. 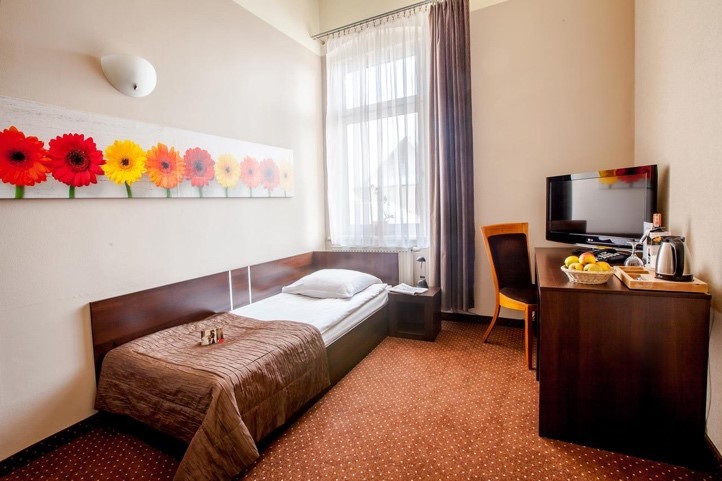 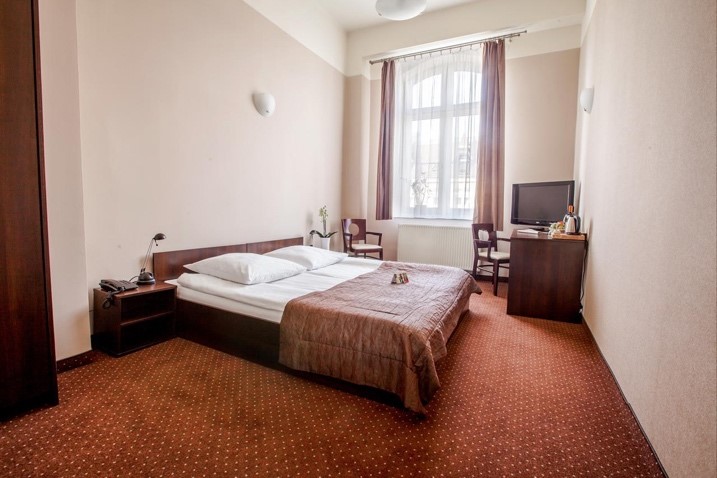 The professional staff team prides itself on a high standard of service and is available 24 hours a day. There is an elegant restaurant at the hotel specializing in traditional Polish cuisine, where guests can enjoy varied buffet breakfast each morning.

The secure parking is located 150 m from the hotel 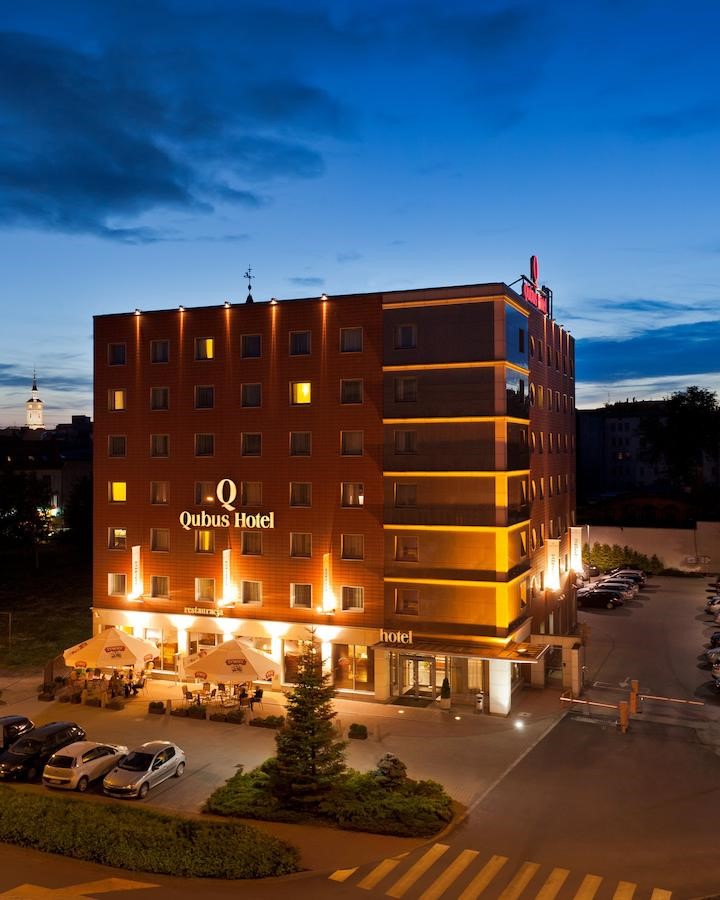 Located in the Gliwice city centre, Qubus Hotel Gliwice offers modern, air-conditioned rooms with free Wi-Fi. In the morning guests can enjoy breakfast buffet with a wide choice of products, including home-made bread, smoked cheeses and meat.The rooms at the Qubus Gliwice come with satellite TV and a large work desk. All have a private bathroom with a shower and a hairdryer.

Qubus houses a restaurant, open until midnight, where both international dishes and traditional Polish specialities are served. Qubus Hotel Gliwice is situated within a short walking distance of the historic Gliwice Market Square. The Gliwice Railway Station is just 600 m away. 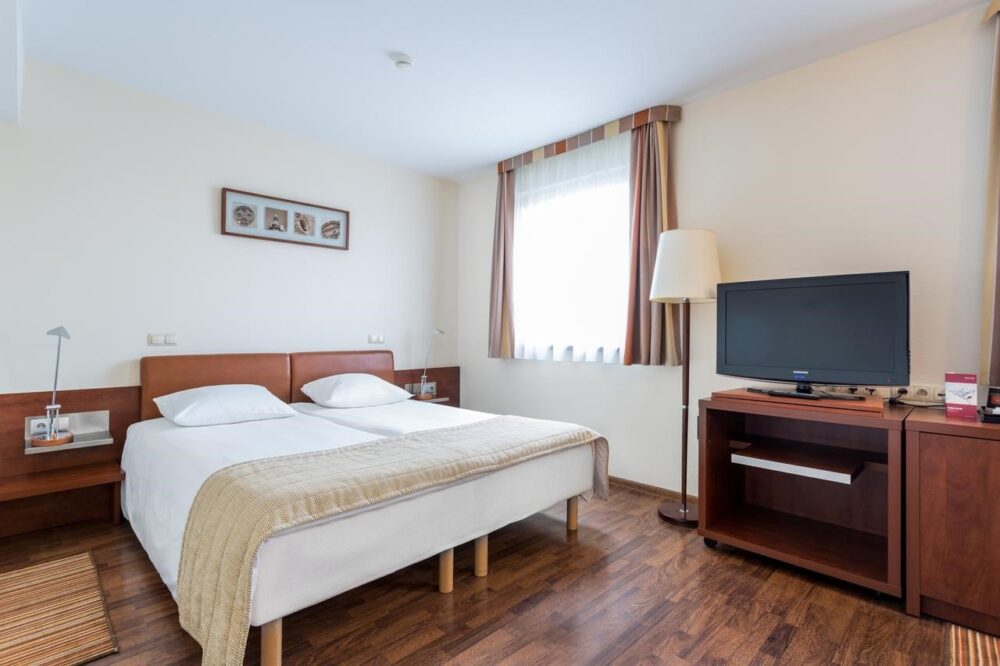 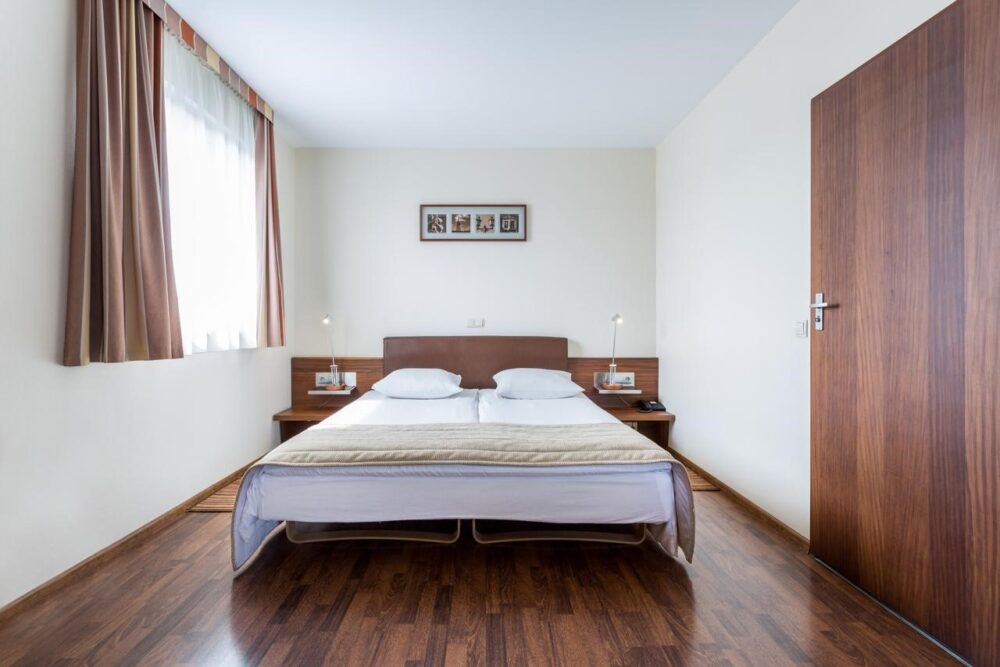 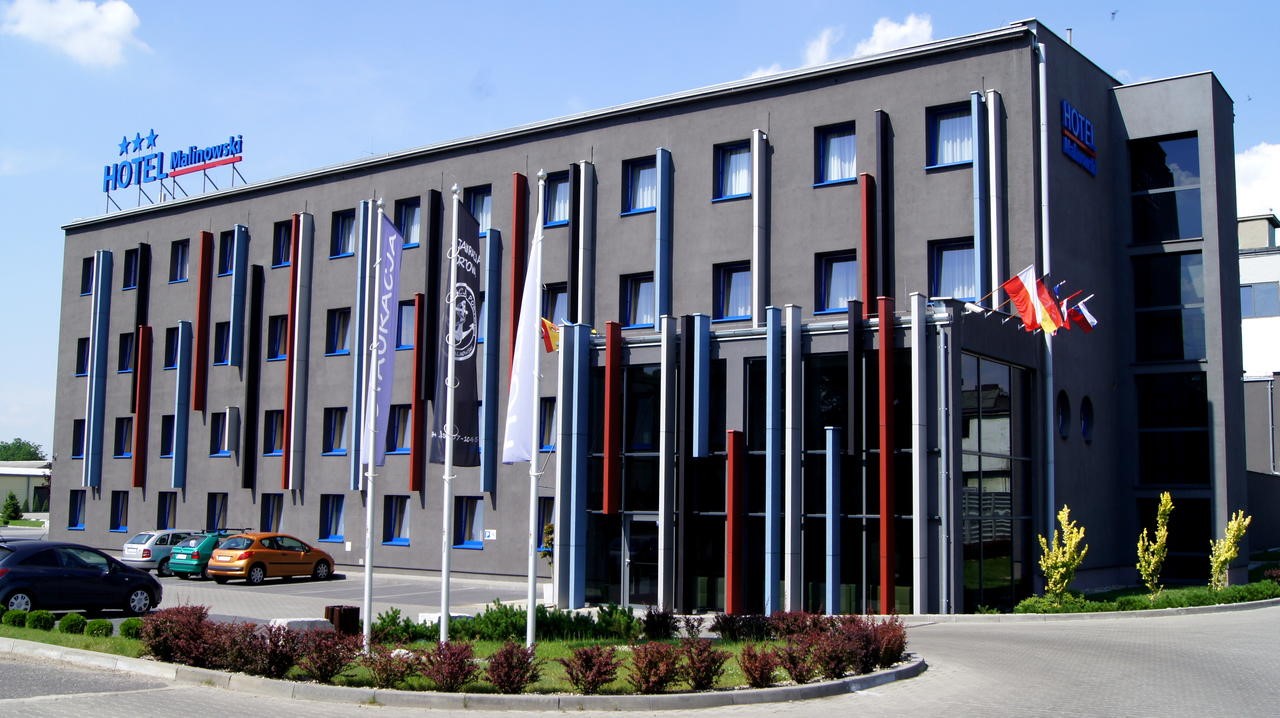 Located in the city center, just about 300 m from Arena Shopping Center, Hotel Malinowski offers accommodations with free private parking and Wi-Fi. Gliwice Train Station is 1.2 mi away. The rooms at 3-star Malinowski are carpeted and elegantly decorated. Each comes with a flat-screen TV, a desk and free mineral water. A private bathroom is featured in each room.

The air-conditioned Portowa Restaurant specializes in regional and European cuisine. Guests can also relax with a drink at the bar and enjoy a breakfast buffet every morning. The hotel offers billiards and table football, as well as a corner with toys for children. The front desk staff are available 24 hours a day and can assist guests with organizing shuttle services. 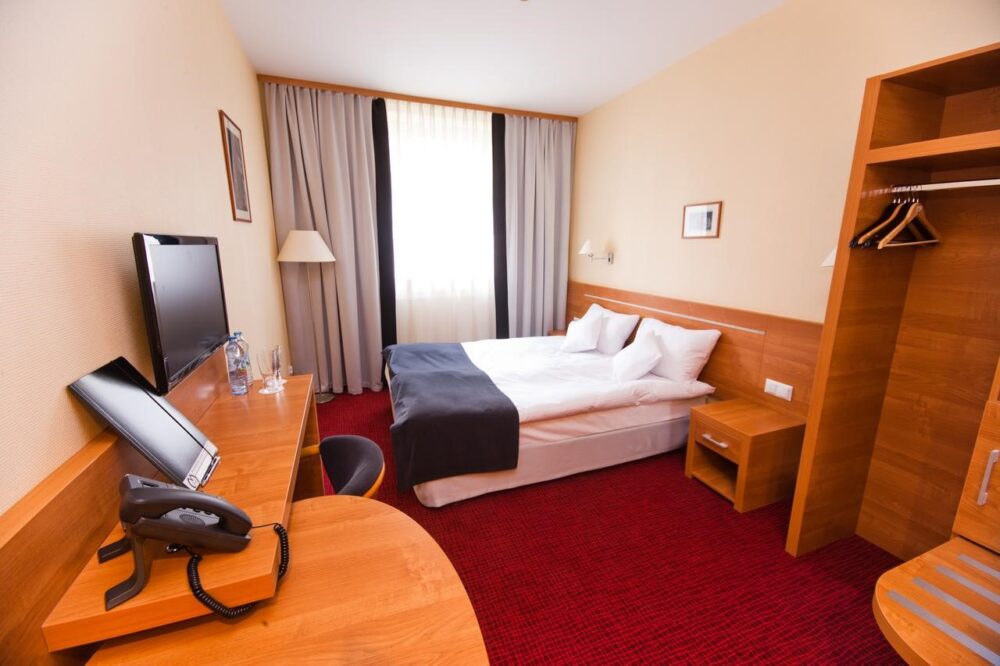 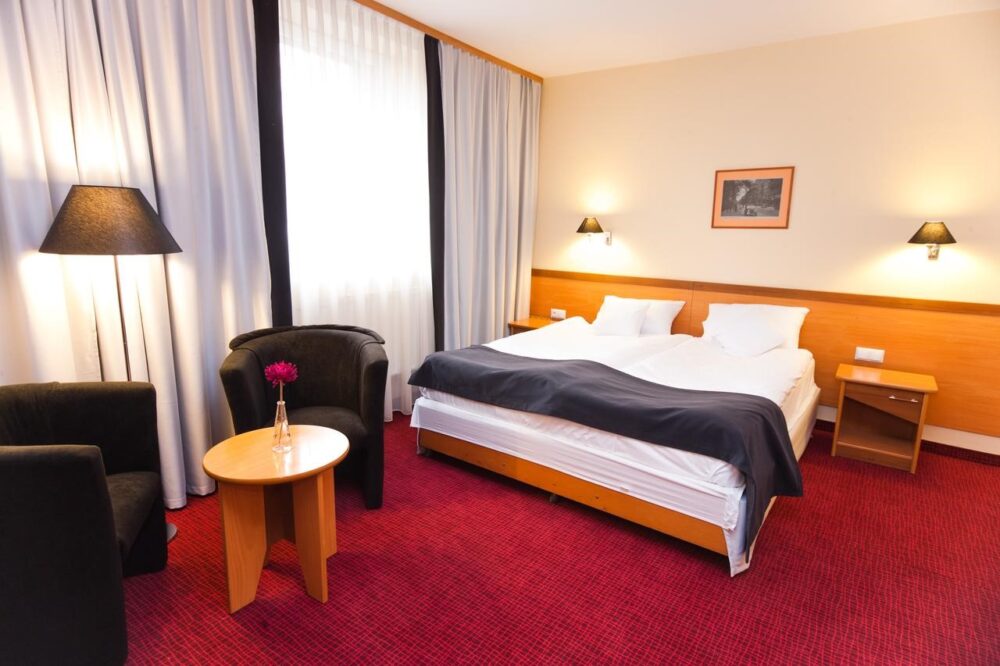 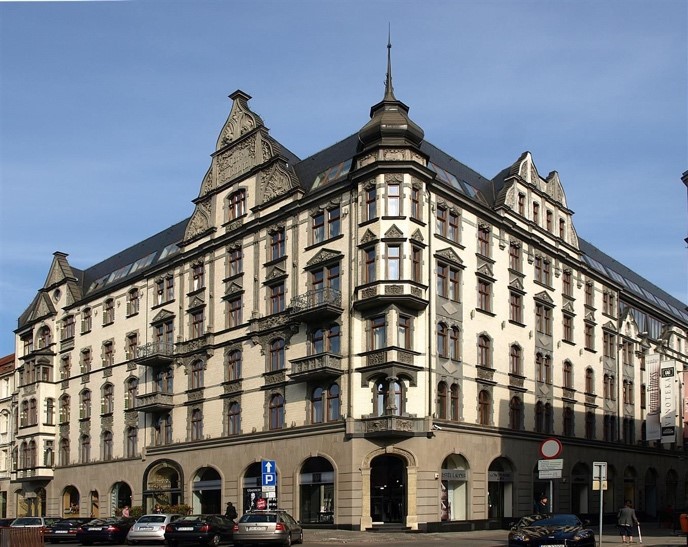 Recommended for the Media, supporters’ accommodation

Located in the center of Katowice, the 5-star Hotel Monopol offers spacious, air-conditioned rooms. The hotel provides free wellness facilities, such as a swimming pool, and dry sauna.

The rooms of Hotel Monopol Katowice feature an interior design and wooden furniture inspired by Art Deco. All rooms include work desks, a satellite TV and internet connection. All room have a paid mini-bar. In certain rooms, there is a Nespresso coffee machine available at a surcharge. Free bottled water is provided in all rooms, while the suites feature a complementary welcome fruit plate.

There is a number of fitness classes organized at Hotel Monopol and guests can participate free of charge. The schedule is available at the reception. Guests are asked to sign up in advance for cycling and aqua aerobics classes. A selection of massages is also available. 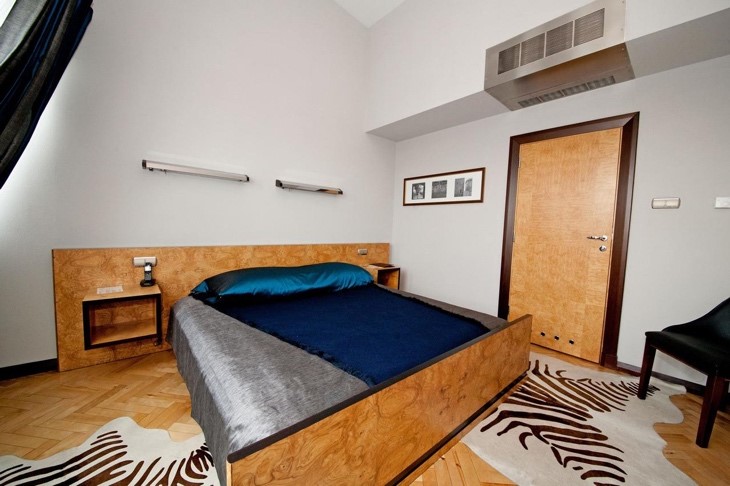 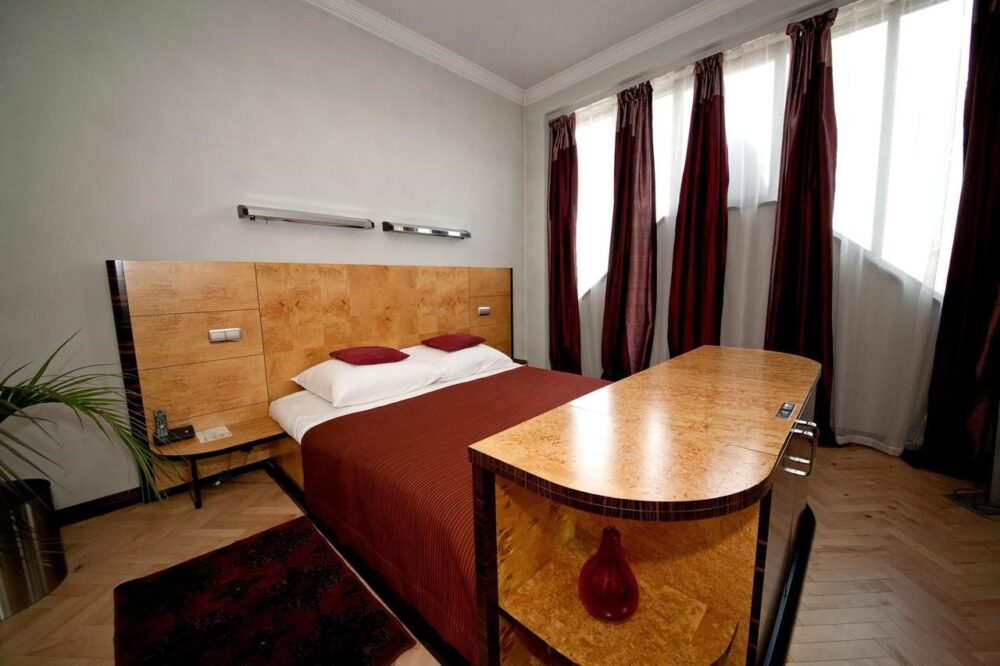 The hotel has two restaurants which were awarded a Gault and Millau 2016 hat. Ristorante Cristallo specializes in international cuisine, while Monopol restaurant serves lunch menu which changes every day. 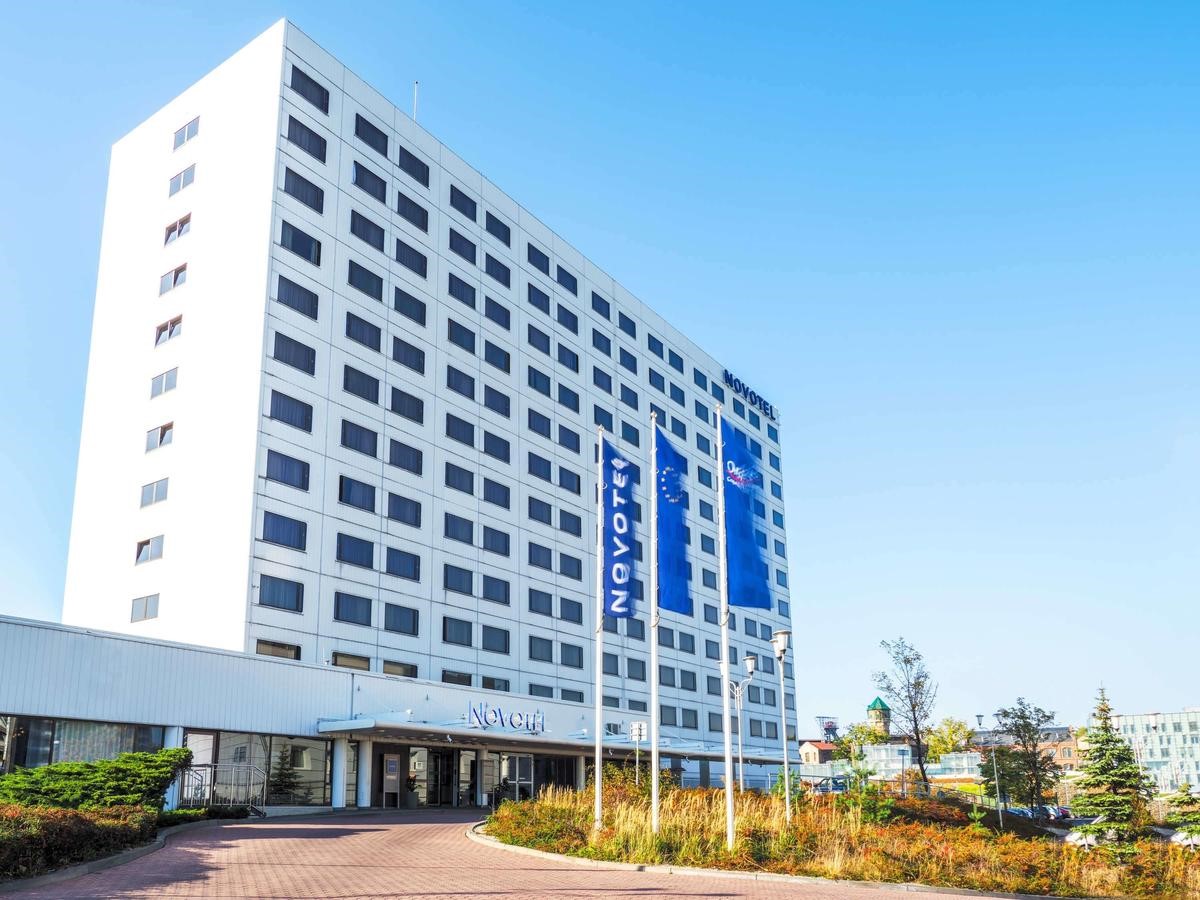 Recommended for the Teams’ accommodation

Offering spacious air-conditioned rooms, the nonsmoking Novotel Katowice Centrum features an indoor swimming pool and a sauna. It is located just 701 m from the city center and Spodek Arena. All rooms in Novotel Centrum have free wired internet and an private bathroom with bathroom amenities. Rooms have comfortable sitting areas.

Novotel Katowice Centrum features health and fitness facilities that include a hot tub. They also provide massage services. The hotel’s restaurant specializes in traditional Polish and international cuisine. Room service offers hot meals and snacks 24/7. Guests can also relax in a hotel bar that serves a wide selection of coffee and drinks. Novotel Katowice is located only 0.9 mi from Katowice Główny railway station. Silesian Theater and Silesian Museum are about 0.7 mi away. The International Congress Center is 0.8 mi away. 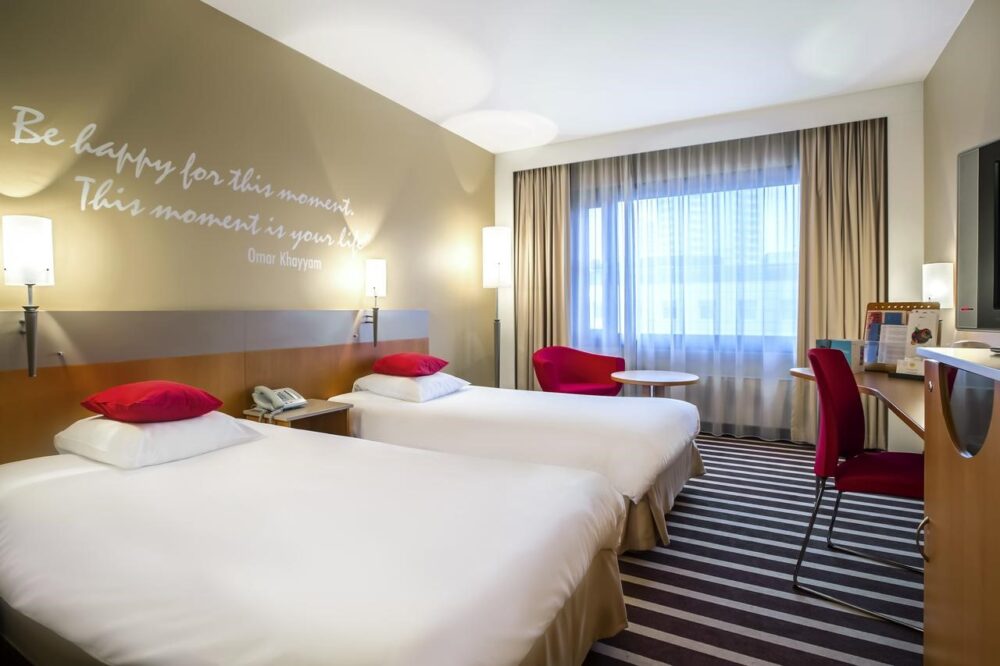 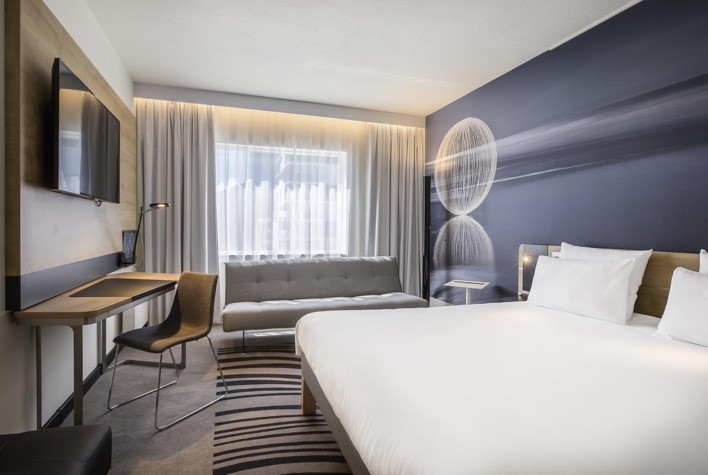 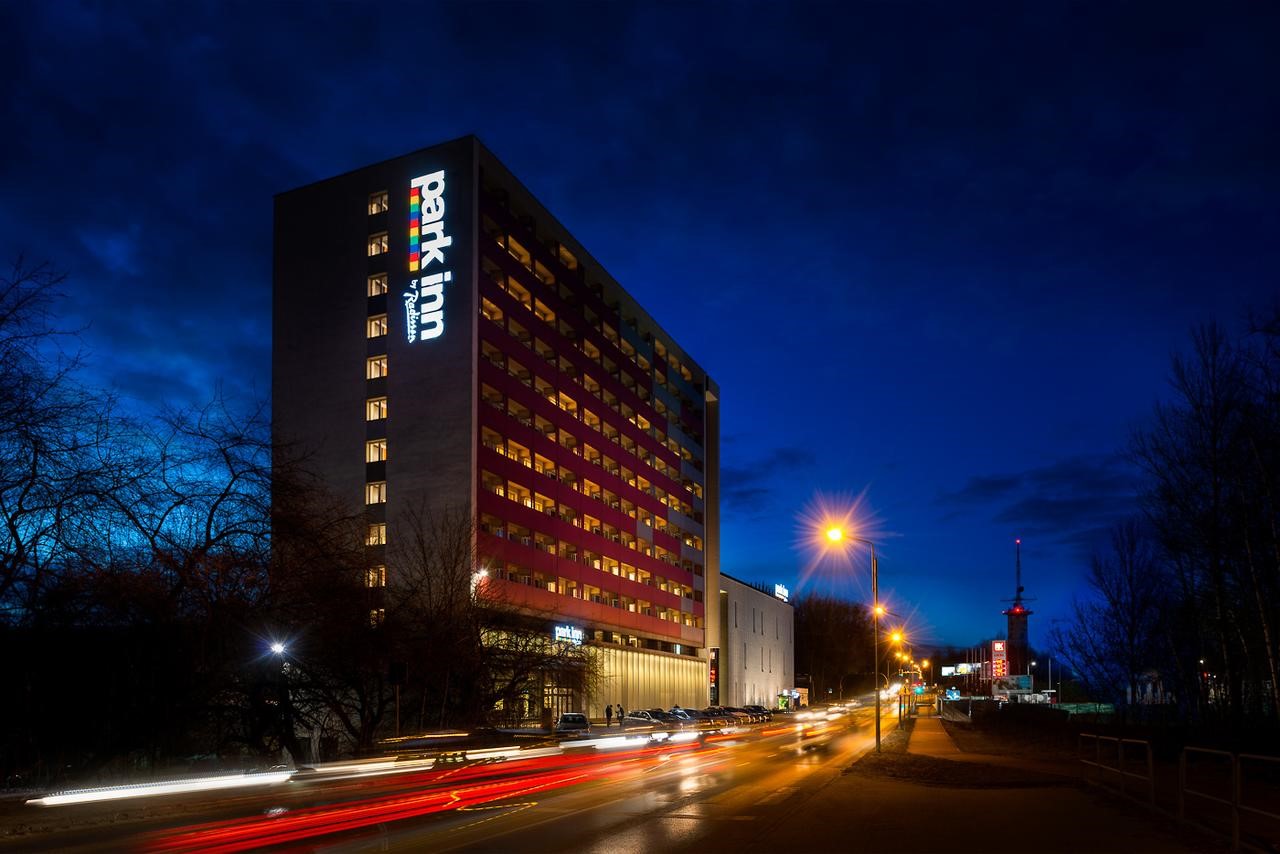 Park Inn by Radisson Katowice offers modern rooms with free high-speed WiFi and parking, as well as an electric vehicle charging station and a modern fitness center with saunas facilities. The hotel houses Restauracja Kuchnia Otwarta. The sports and events venue, Spodek, is only a 6-minute drive away, while the largest shopping mall in the region, Silesia City Center, is a 4-minute drive away. The International Conference Center is also only 6 minutes’ driving distance from the hotel.

The air-conditioned rooms at Park Inn by Radisson Katowice have stylish interiors and an LCD TV. Each has a modern bathroom with a bath and a hairdryer. Complimentary bottled water is also provided, as are tea/coffee facilities. A varied buffet breakfast is served every morning at the restaurant which serves Silesian and Polish cuisine with dishes consisting of only fresh ingredients. Guests can also enjoy a drink and snacks at the lobby bar. Guest can benefit from free business center desk located on the first floor. Front desk staff can arrange bicycle rental. Guests can benefit from 24h room service the on-site library or Nordic walking equipment. 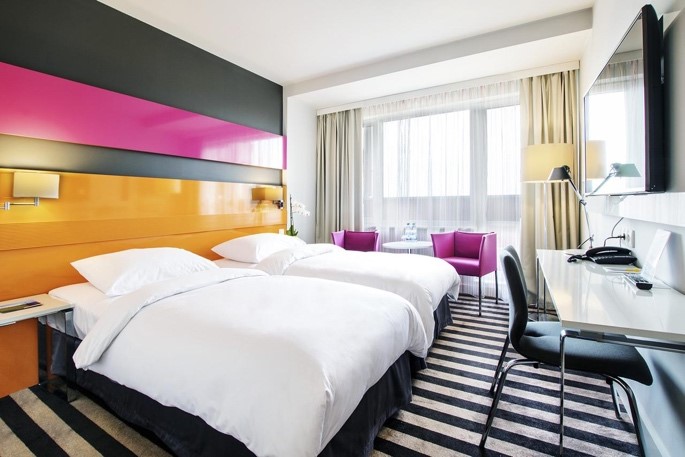 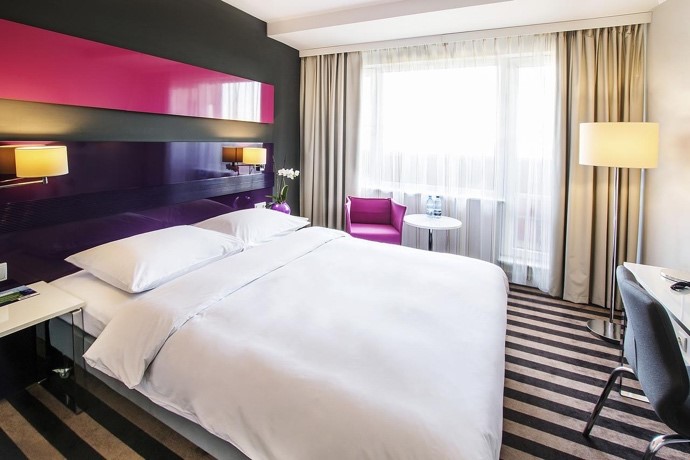 The hotel is located next to one of Europe’s largest parks, the Silesian Culture and Recreation Park, which is home to the city zoo, planetarium, skansen, amusement park, cable car and numerous bike and hiking paths. 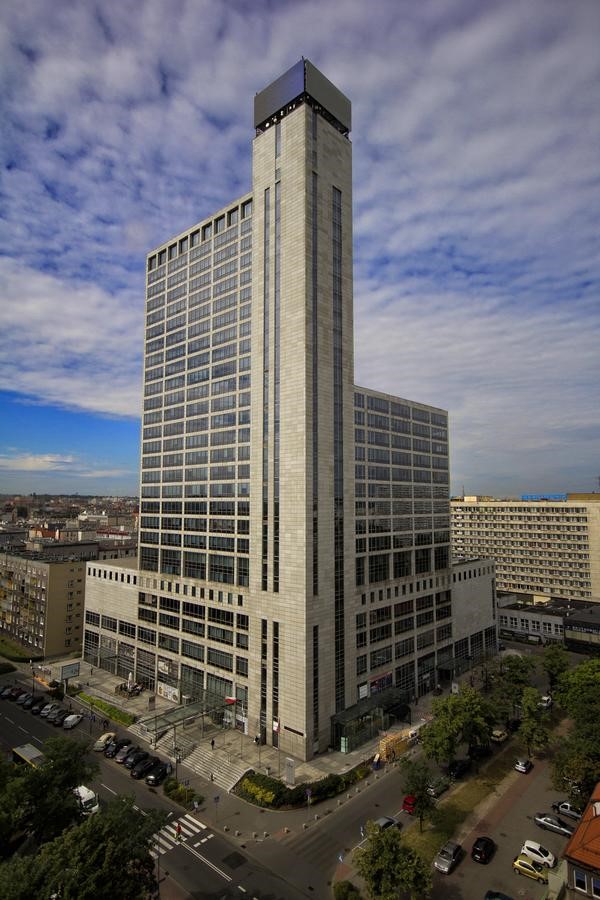 Every room at the property comes with a city view and a safe. Each one has a private bathroom with a hairdryer.

The hotel breakfast is composed of more than 100 fresh products, including regional smoked sausages, cheeses, salads and hot meals. The 27th Floor restaurant located on the 27th floor serves international and Polish dishes. At the bar overlooking the city, guests can enjoy a drink and a vast selection of cocktails.

The hotel is located just 801 m from the Katowice Railway Station. International Katowice Fair is about 1.6 mi away. Spodek Arena is 450 m from the hotel. It is a 5-minute walk to the International Conference Center and Polish National Radio Symphony Orchestra Katowice. 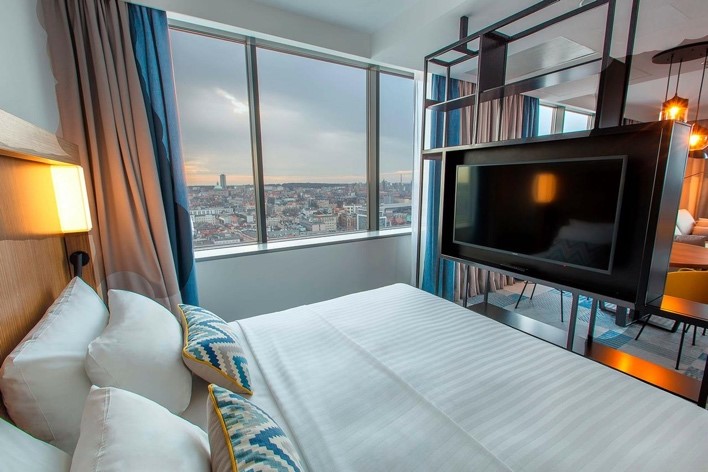 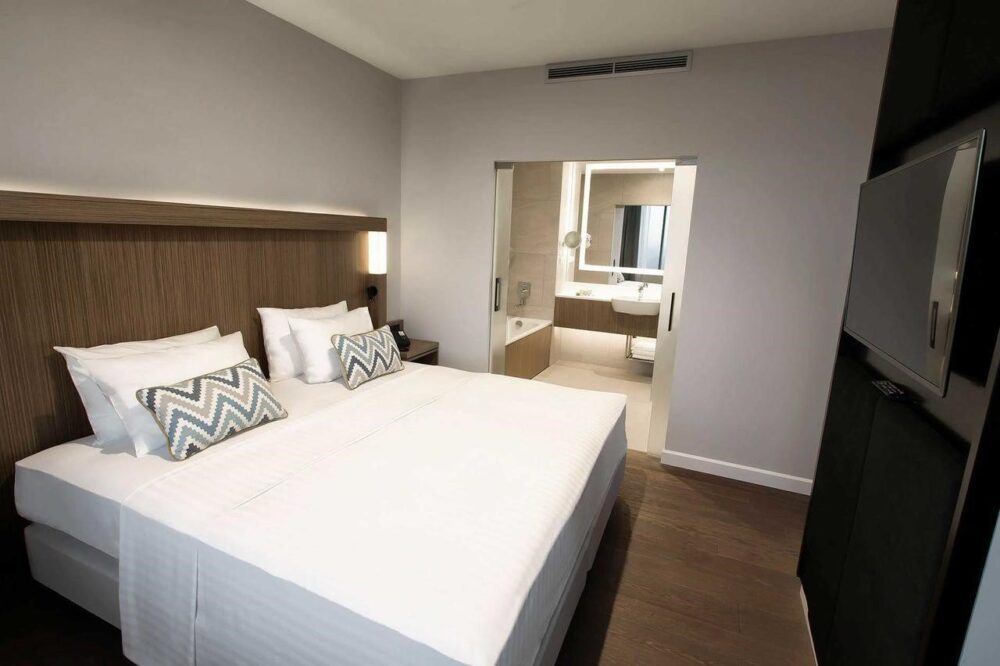